In this section we will write image to texture conversion and the kernel dispatching code.

MTLTexture, or There and Back Again 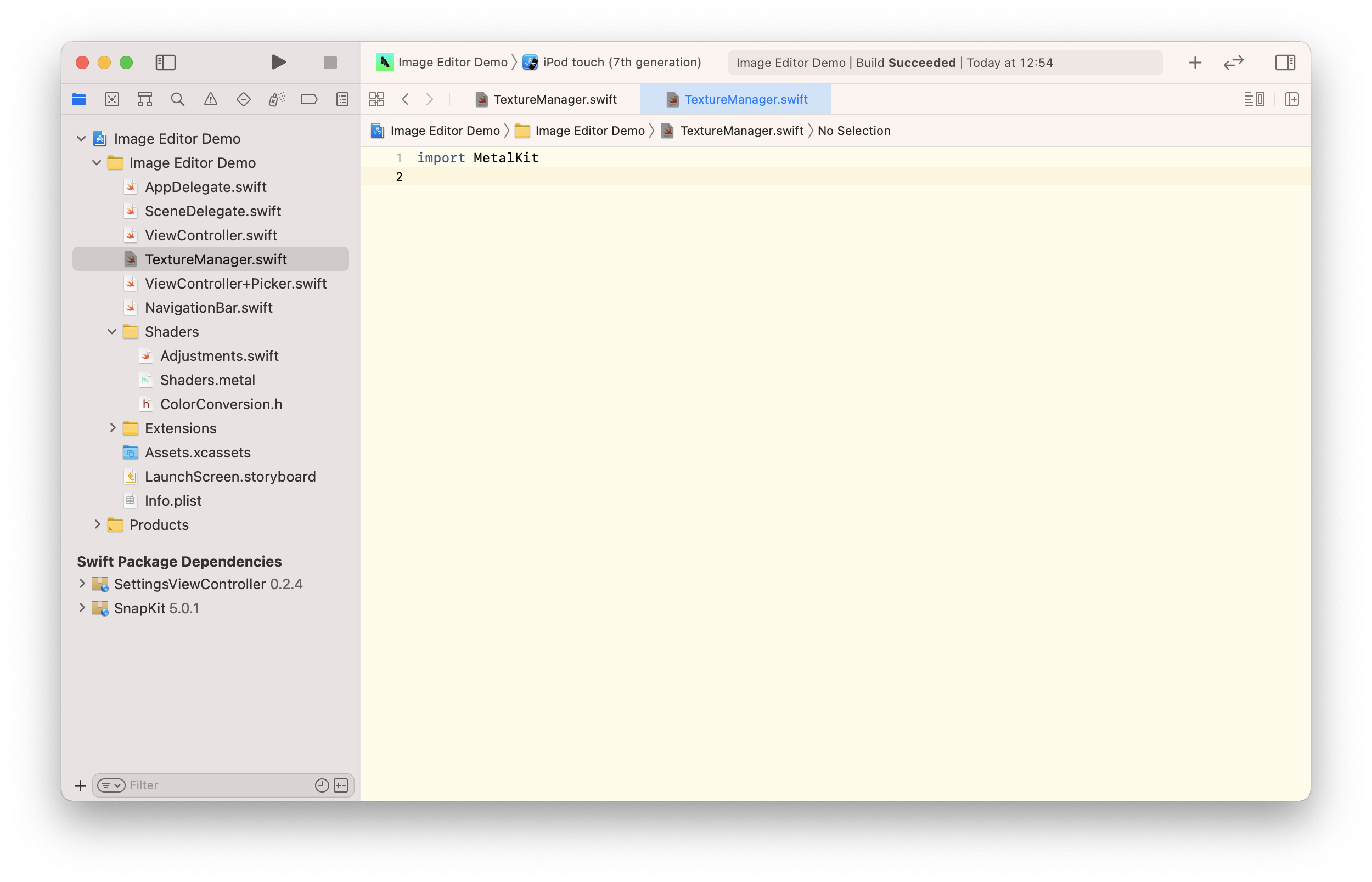 Create a class TextureManager. We are going to incapsulate texture to image conversion in it with a throwable API.

The first and the only property that this class will hold is MTKTextureLoader.

This object is able read common file formats like PNG, JPEG, asset catalogs, CGImages and decode them into Metal textures.

To initialise the class, MTLDevice is passed to the constructor:

Now let’s write a function for creation a texture from a CGImage that will use the texture loader.

Here we create MTKTextureLoader options that specify how the result texture will be created. Currently the options are empty and now we are going to fill the dictionary.

The texture usage OptionSet describes what operations will be performed with the texture. But given that we have images which we can read and modify like the other data, why does Metal provide such API? The point is that MTLTextures holds a reference to the block of memory where the real pixels are located and Metal can apply certain optimisations for a given texture, based on its intended use. I’s a good practice to set .shaderRead for read-only textures and .shaderWrite to those which will contain the result.

Mipmaps are smaller, pre-filtered versions of a texture, representing different levels of detail (LOD) of the image. They are mostly used in 3D graphics to draw objects that are far away with less detail to save memory and computational resources. 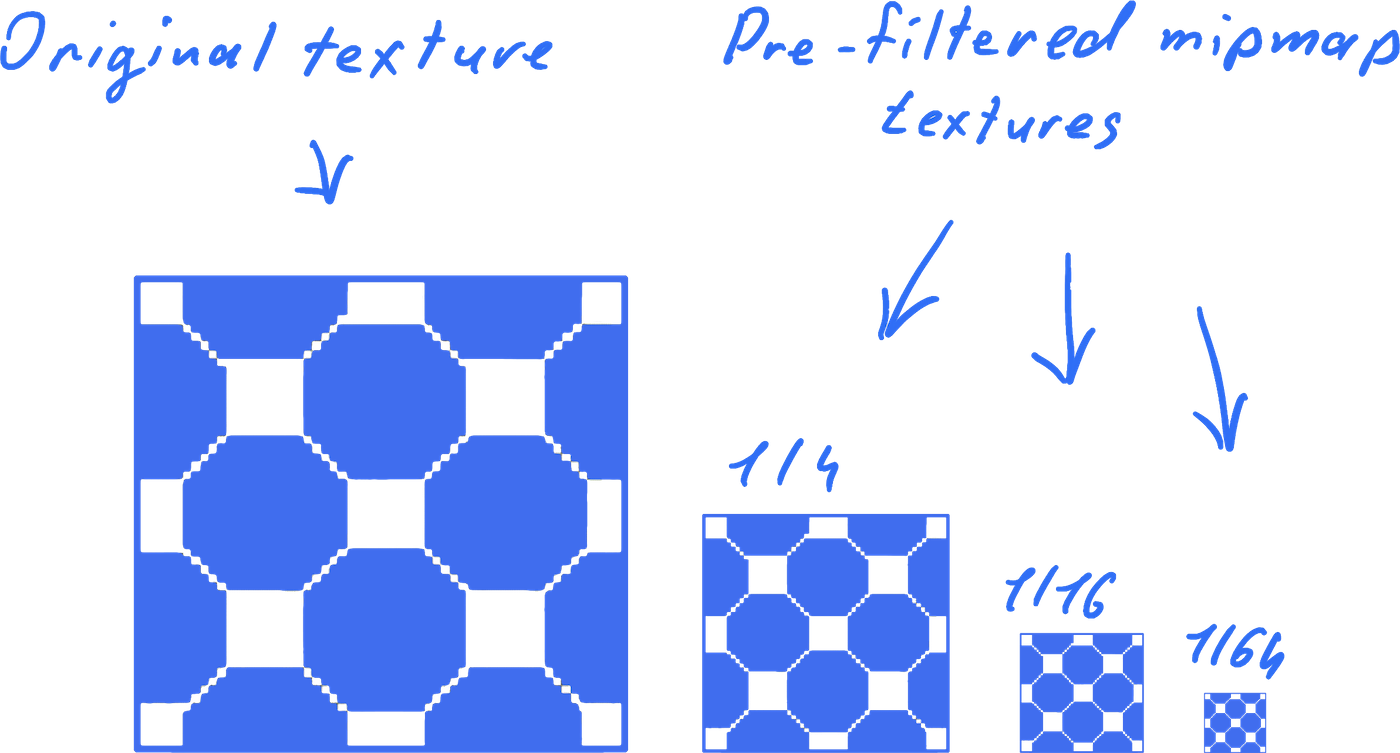 We won’t use mipmaps in our app, so we disable their allocation and generation.

In order to understand why do we pass sRGB as false to the texture options, first we need to talk a little bit about gamma. Look a the picture below. 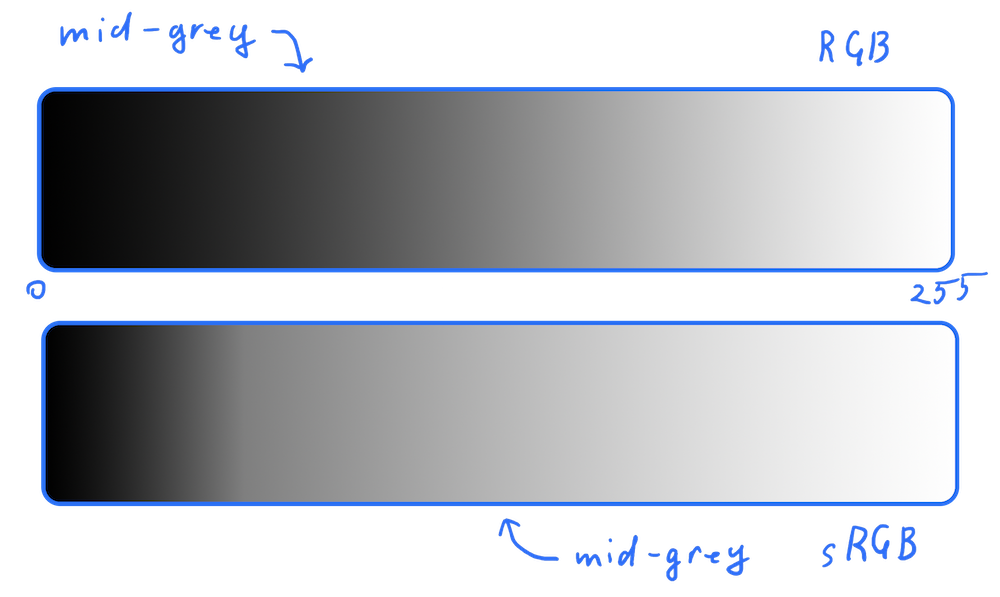 Now, look at the chart below. It depicts the difference of light perceivation between human eyes and a digital camera. 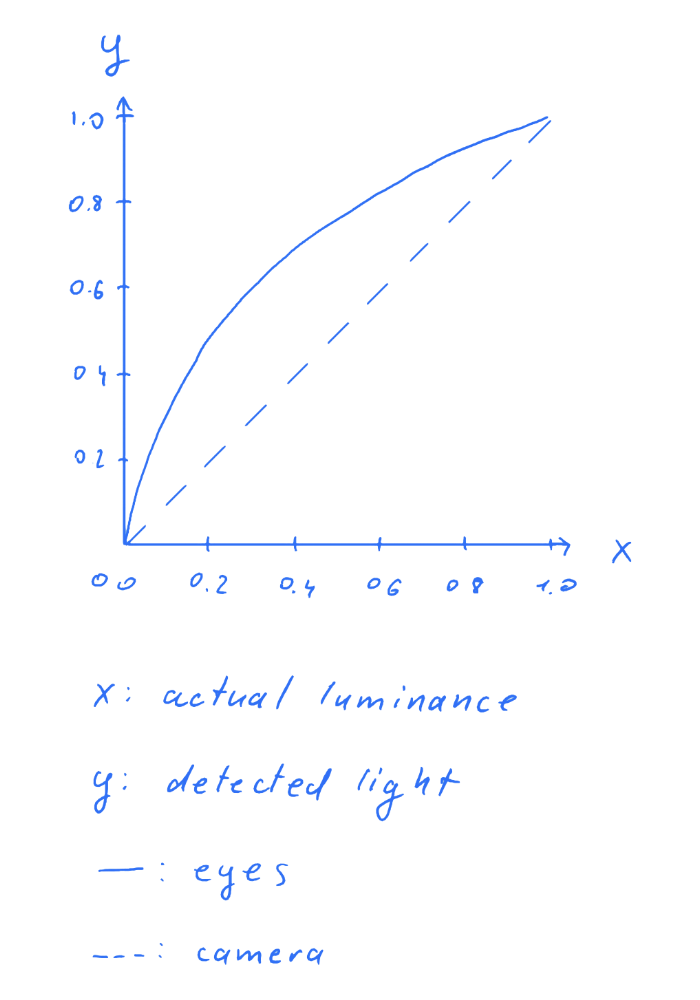 As we can see in the chart, compared to a camera, we are much more sensitive to changes in dark tones than we are to similar changes in bright tones. There is a biological reason for this peculiarity: it is much more useful to perceive light in a non-linear manner and see better at night than during the day.

That’s why the bottom line looks like incorrect brightness scale despite the fact that the increase of actual number of photons is linear.

So, given the fact that human perceivation of light is non-linear, in order not to waste bytes representing many lighter shades that look very similar to us, digital cameras do gamma encoding and redistribute tonal levels closer to how our eyes perceive them.

This is done only for recording the image, not for displaying the image. Standard RGB or sRGB color space defines a nonlinear transfer function between the intensity of the color primaries and the actual number stored in such images.

If you load an sRGB image file, iOS it will create a CGImage with sRGB IEC61966-2.1 color profile and gamma decoding applied to the pixel values. For the same image saved as general RGB file a CGImage will be created with Adobe RGB (1998) color profile and no gamma decoding applied to the pixels. Both of these CGImages will contain the same pixel values in memory.

Now, getting back to the texture loader. When it creates a texture from a CGImage, it copies the bytes from CGImage data without modification. The sRGB option doesn’t influence on anything with RGB images passed to the texture loader and you always get textures with ordinary bgra8Unorm pixel format. But when you use CGImages with sRGB color profile, this option does influence on what pixel format the created texture will have. If you pass false, you will get a bgra8Unorm texture. If you pass true , you will get bgra8Unorm_srgb texture. And if you don’t add this option at all, the texture loader will make a decision for you and return an bgra8Unorm_srgb texture too.

Why do we care about that? The thing is that in shaders sRGB textures are gamma decoded while being read and gamma encoded during the writing. It means that you will get twice gamma decoded pixel values in the kernel: first gamma decoding is done by the system when you create a CGImage from an sRGB image file, and second is done by Metal when you passed sRGB texture to the shader. In this case you get incorrect, darkened values in the shader. This looks pretty messy, so the best option is just always explicitly pass sRGB: false while creating textures from images to avoid gamma-related issues.

Now, let’s create a function to convert MTLTexture back to CGImage. Add an empty function:

In this function we are going to allocate some memory where the texture will export its contents. Then we will create an image from this block of memory. From this point we are going to fill the body of the function.

First, we calculate bytes per row. In memory the image is stored contiguously row by row with optional paddings between them. The paddings might be added for better CPU access to the blocks of memory. In our case we don’t add any paddings and calculate the value as the width of the texture multiplied by 4 bytes per pixel.

The length of the memory where the image bytes will be stored can be calculated as bytes per row multiplied by the texture height. Next, we allocate a chunk of memory where the pixels will be stored. It is aligned by UInt8 because bgra8Unorm textures pixels are stored as 8-bit integers. This memory is temporary, so we will free it at the end of function execution.

Calculate the region of the texture and call the getBytes function to store texture pixel values to the memory we allocated. This function takes a pointer to the start of the preallocated memory and writes pixel values of the specified region to it with predefined bytes per row. It is quite interesting that Metal doesn’t allow you to get the pointer to the raw pixels of the texture; instead, it allows you to export them via getBytes and import them with the help of replace(region:) function. The explanation is that Metal can adjust the private layout of the texture in memory to improve pixel access on GPU while sampling. This can be done with texture descriptor’s allowGPUOptimizedContents flag set true. There is no documentation on that, the texture memory layout may differ from GPU to GPU, but here is an example of how the memory reordering could look like this: 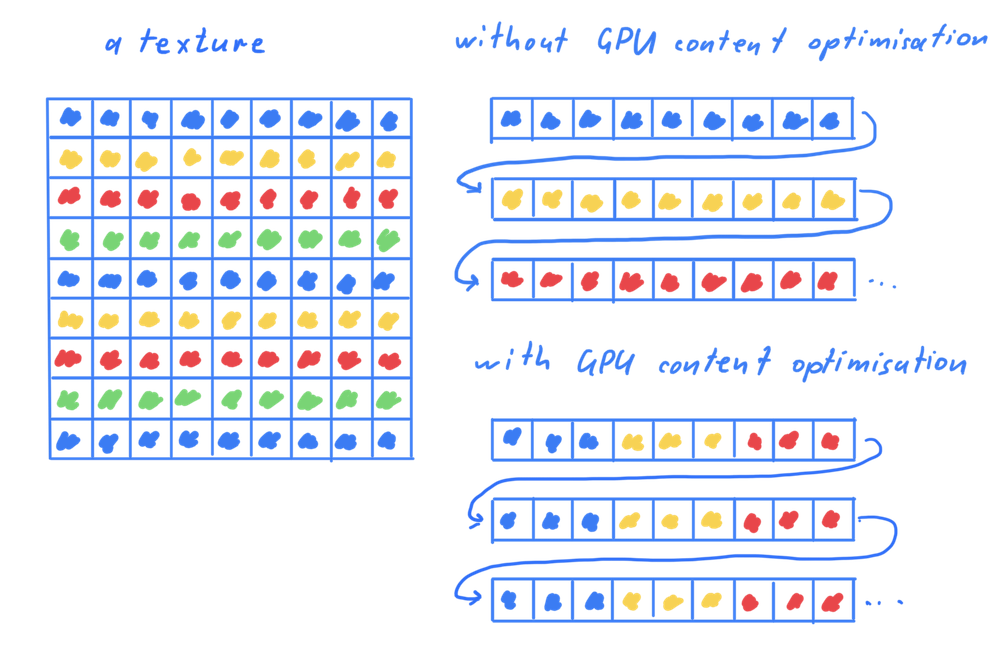 Create a color space and bitmap info values. The bitmap info can be interpreted as: the pixels of the image are represented by 32 bits with little-endian byte order and we don’t care about the information in the alpha channel. Here is the difference between little and big endian byte orders:

Finally, create a CGImage with the data and information we provided: each pixel contains of 4 UInt8s or 32 bits, each byte is representing one channel. The layout of the pixels is described with bitmap info. The function should look like this:

Let’s add the last convenience function to the texture manager. This one helps to create a texture with similar properties.

We have finished with texture manager. Now the object of this class is able to create a texture from a CGImage, create an image from a texture and create an empty copy of a texture with the same dimension pixel format, usage and storage.

The final step is to create a command queue, a command buffer and pass it to the encoding function.

Navigate to ViewController.swift and add the following properties:

Now, declare Error enum and replace the constructor of this ViewController with the following:

Here we create the library for the main bundle and initialise command queue, adjustments and texture manager. 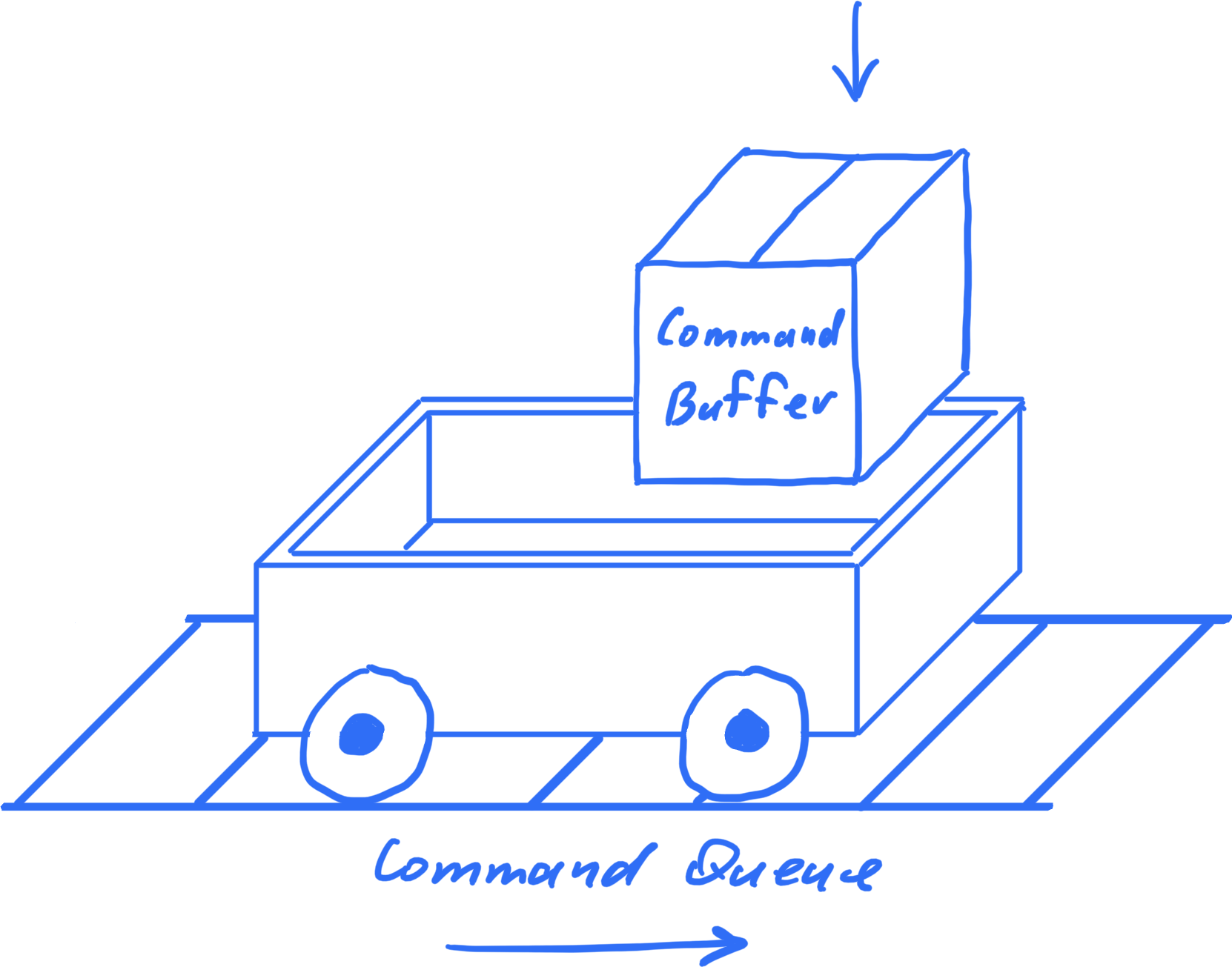 The final two steps are: create textures from images and update the sliders logic. Update the handlePickedImage function:

And finally, in the commonInit body replace the settings:

Hooray! We’re finally done! From now on, if you have done everything correctly, you can compile and run the application 🎉.

In these four parts, we learned a lot: how to write a kernel, how to make an encoder for it, how to dispatch the work to the GPU and how to convert textures to images and backwards, got familiar with gamma correction, the internals of how pixels are stored in memory and more. The source code of the final project is located here. But the that’s not all yet. At this moment we are using UIImage to display the result. In the next part, we will replace it with rendering in CAMetalLayer and start using more Swift-friendly API to work with Metal.