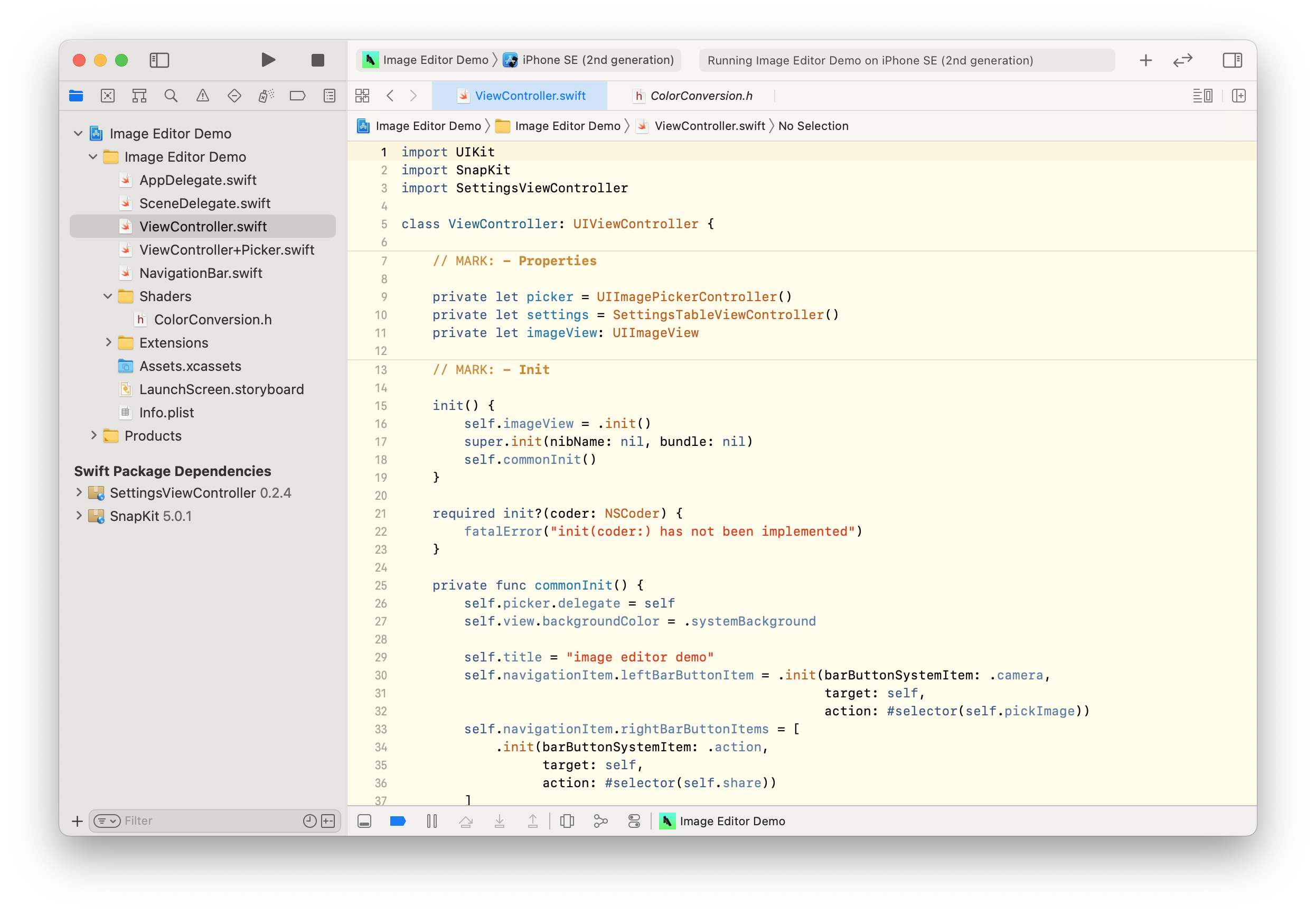 The starter project contains the boilerplate code. The main logic is located in ViewController.swift. If you compile and run the Image Editor Demo app you’ll see that it is able only to choose an image display it in UIImageView and export via UIActivityViewController. There are two Temperature and Tint sliders that do absolutely nothing. From this point we’re going to add image editing functionality to our app.

In order to adjust images using GPU, we need to provide some sort of instructions or a program to it. Originally such GPU programs were used only in 3D pipelines and often were responsible for lighting and shading effects. That is why over time, they were named shaders. In Metal shaders are written in Metal Shading Language which is a subset of C++. It means that MSL has some restrictions (there are no lambda expressions, dynamic_cast operator, etc.) and extensions (support of textures, buffers, etc.), but mostly shader functions are pretty similar to ordinary C++ code.

Let’s create Shaders.metal file that will contain our compute code. 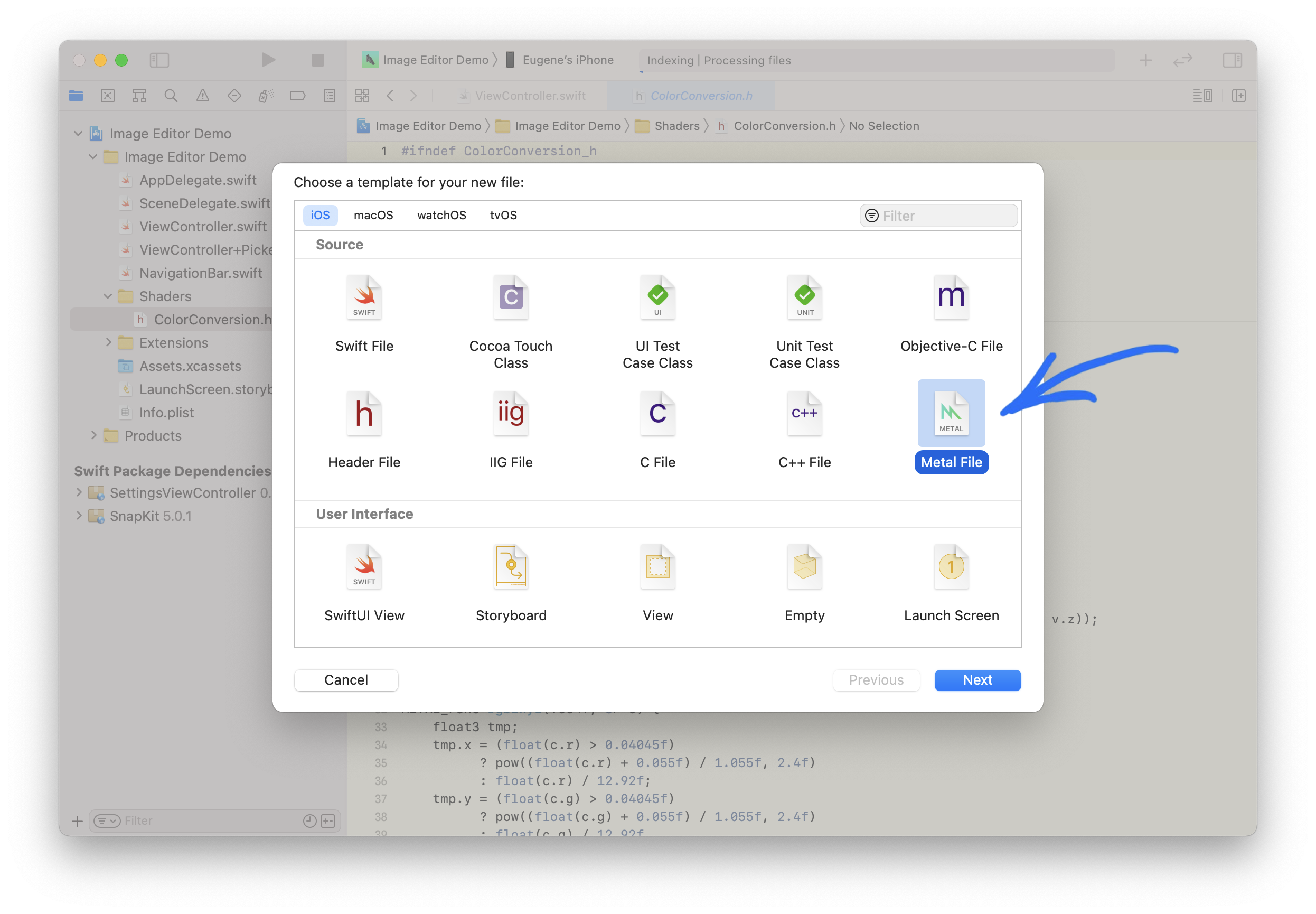 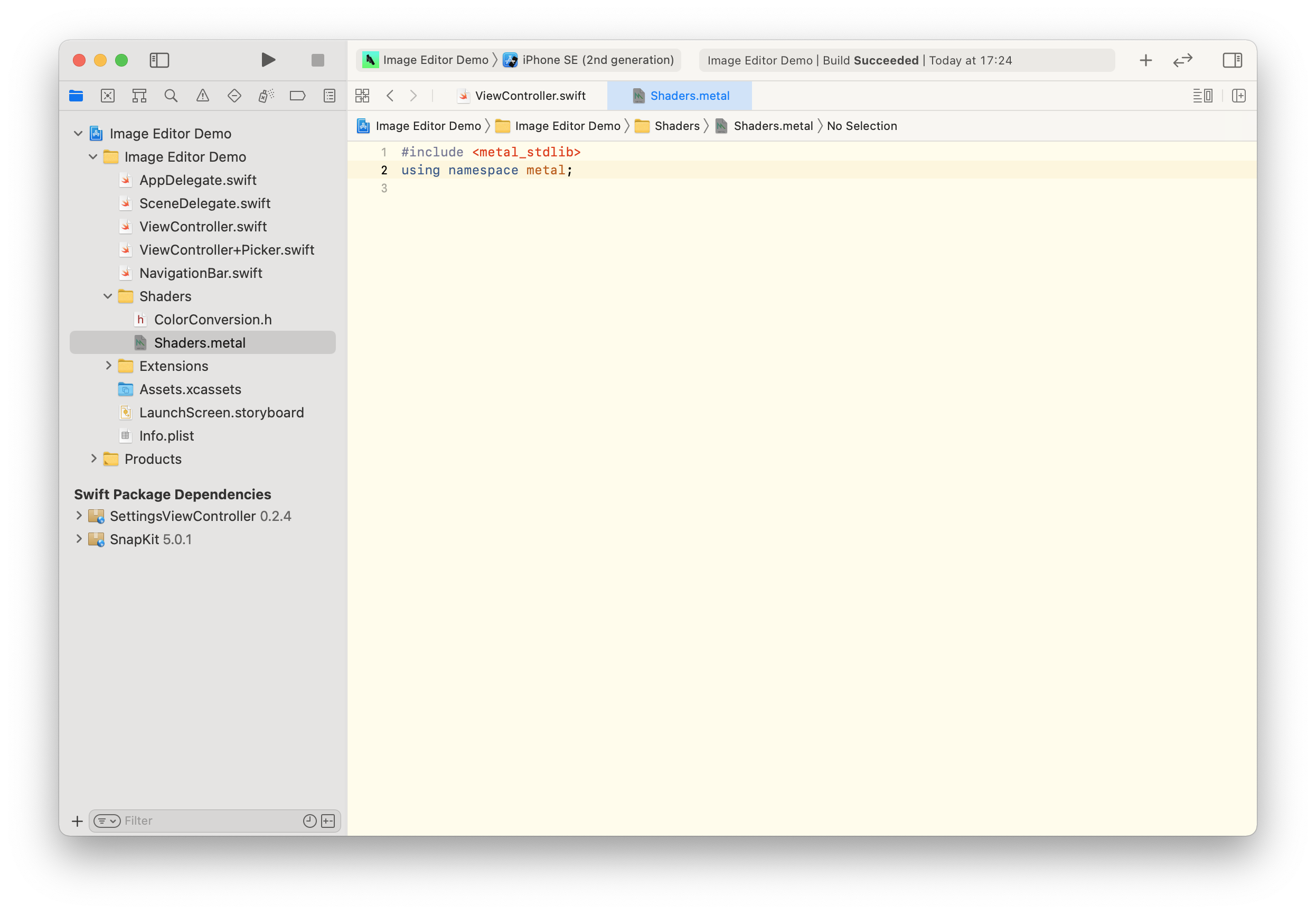 This is our starter shader function. Currently, it is able only to copy pixels from one image to another. Let’s take a look, what how does it work.

The first declaration is kernel. It means that the following function is a compute kernel - a set of instructions for general-purpose computing. Metal also provides vertex and fragment types of functions used in 3D.

Next, void means that our function does not return anything. Kernels are always void, they only read, modify and write the data.

In the arguments section of the function we can see source, destination and position. Source and destination are textures. A texture is a structured collection of texture elements, often called texels or pixels. The exact configuration of these texture elements depends on the type of texture. The source pixels are stored in a two-dimensional texture as floats. This is exactly what is described with a templated type texture2d<float, access::read>. In order to write the result, we use a texture of a similar type with access::write.

Metal provides a number of texture templates: texture1d, texture2d, texture3d, texture1d_array, texture2d_array and more. You can see all of them in chapter 2.8 of MSL specification, but speaking about image processing, you will need only texture2d.

Each texture has to be provided with a unique identifier. It is done with the [[ texture(n) ]] attribute, where n is used as a number of texture slot while passing the texture object to the shader encoder on CPU side.

The final argument is position. When a kernel function is submitted for execution, it executes over an n-dimensional grid of threads, where n is one, two or three. A thread is an instance of the kernel function that executes for each point in this grid, and thread_position_in_grid identifies its position in the grid.

Generally, while working with images, you aim to dispatch a grid of threads of the same dimension as the image. In such cases there is a correspondence between a position of a destination pixel and a position of a thread in the grid which computes the result value.

Now let’s look at the body of the kernel function. First, we get the size of the texture. Then inside of the if statement we use the texture size to ignore out-of-bounds execution via early return. To understand why we do this, we need to get familiar with the structure of the parallel work of threads.

Threads are organised into threadgroups that are executed together and can share a common threadgroup memory. In the most image processing kernels threads run independently of each other, but sometimes shader functions are designed so that threads in a threadgroup collaborate on their working set, for example, while calculating texture mean, min or max.

The threads in a threadgroup are further organised into single-instruction, multiple-data (SIMD) groups, that execute concurrently. It is important to notice that the threads in a SIMD group execute the same code. If there is an if branching in the shaders code and one of threads in SIMD group takes a different path from the others, all threads in that group execute both branches, and the execution time for the group is the sum of the execution time of both branches. So It is a good practice to avoid if statements in shaders or make them as thin as possible.

So, given that we need to minimise number of ifs in shaders, why do we still have it at the beginning of the function? The answer is that old Metal backed devices can operate only uniform sized threadgroups which creates a constraint on the total size of the grid. To support old devices you need to dispatch such a number of threadgroups that the entire size of the grid overlaps the size of the image. And in order to ignore out-of-bounds execution on the edges of the grid, we make an early return. 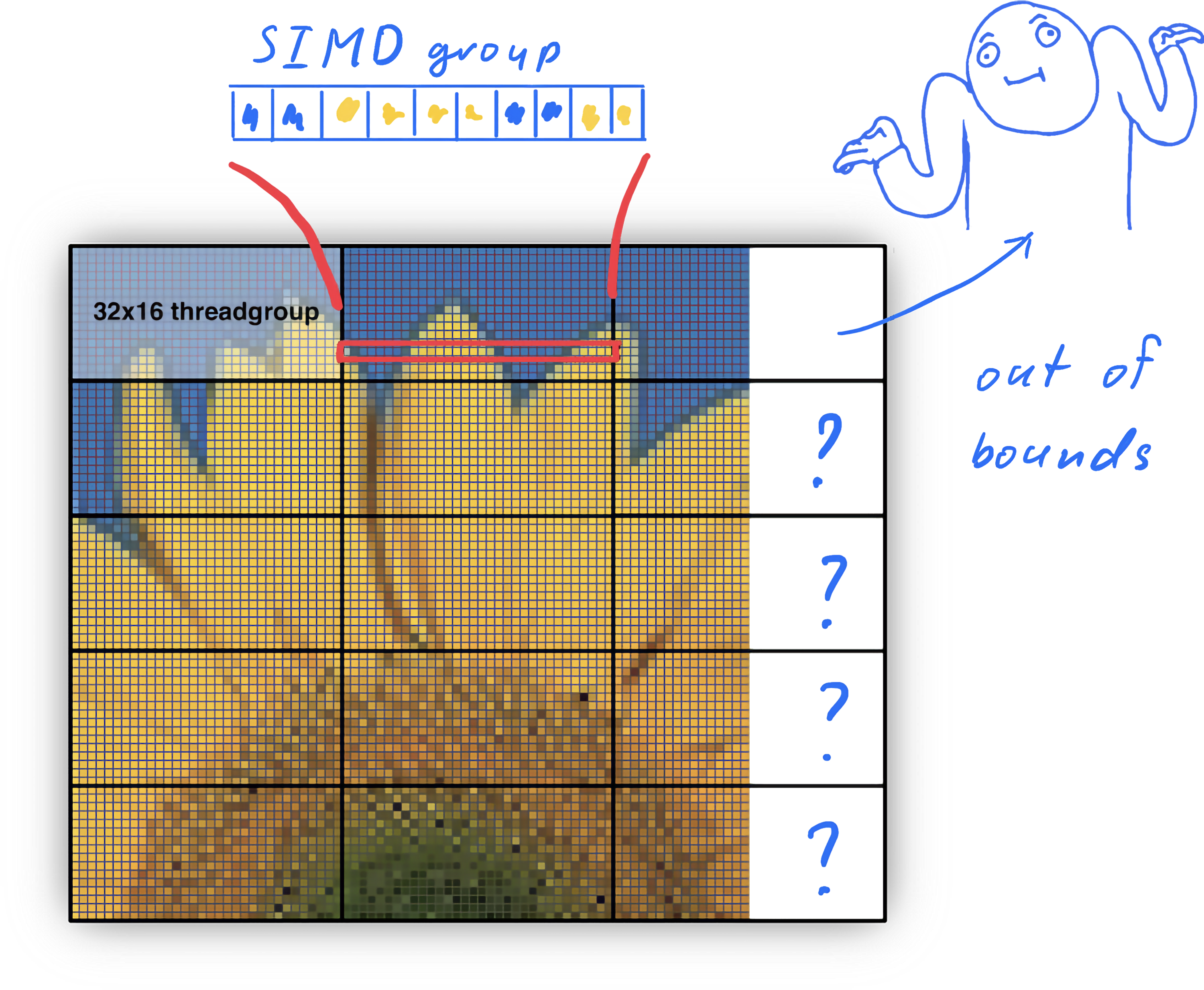 Modern devices support non-uniform sized threadgroups and Metal is able to generate smaller threadgroups along the edges of the grid, as shown below. 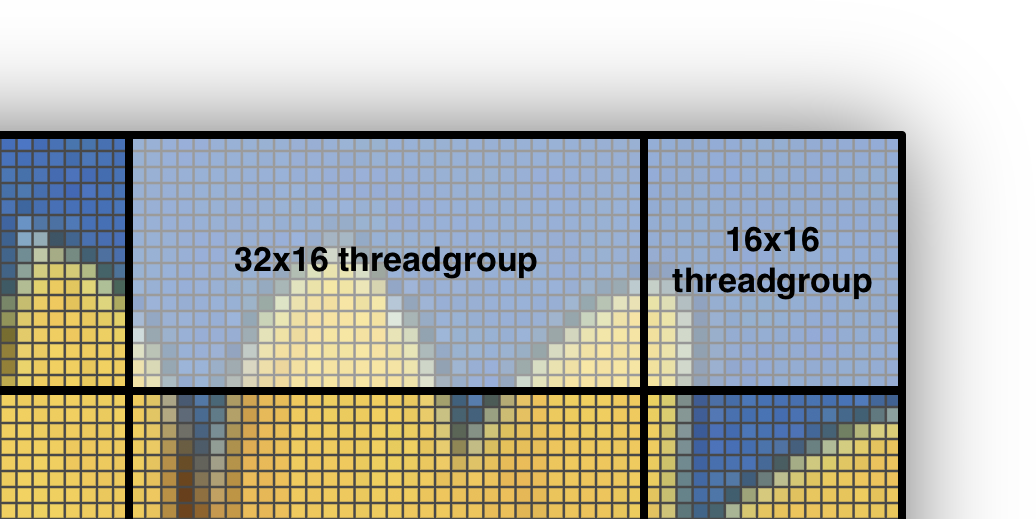 In order to optimise the instructions for modern devices and avoid unnecessary code branching, we can create a separate version of our kernel without boundary check.

One of traditional ways to do it is to use preprocessor macro defines. For example, we could do something like this:

Compiling one function many times with different preprocessor macros to enable different features is called ubershaders. But this approach has a drawback as the size of the result shading library increases significantly.

Another way is to use Metal’s function constants. Function constants provide the same ease of use as preprocessor macros but moves the generation of the specific variants to the creation of the compute pipeline state - the state the GPU is in during the instructions execution, so you don’t have to compile the variants offline.

Let’s declare our function constant by adding the following piece of code before the kernel function declaration:

Next, replace the boundary check with the following:

Similar to textures, FCs also need to be provided with identifiers with the help of an attribute [[ function_constant(n) ]]. As you can see, function constants are not initialised in the Metal function source. Instead, using n, their values are specified during the creation of the compute pipeline state. To learn more about FCs, look at chapter 5.8 of MSL spec.

Great! Now, if the device supports non-uniform threadgroups, the compute pipeline state will be initialised with function constant deviceSupportsNonuniformThreadgroups set true, and the boundary check will be removed from the GPU instructions.

Boundary check is common pattern used almost in every image processing compute shader, so honestly saying, it is just copy-pasted every time at the beginning of the functions 🙂.

Finally, the last two lines of code demonstrate, how to read and write texture data. To get pixel values from certain position, you can use read texture member function, and write to store the values. Metal also allows you to sample and gather from a texture as well as get its width, height and a number of mipmap levels. If you want to learn more it, read chapter 2.8 of MSL specification.

Now let’s add the adjustments functionality to our shader. Replace the arguments of the kernel with the following:

Similar to textures and function constants, the attribute [[ buffer(n) ]] sets an ID to a buffer.

So, we passed temperature and tint references to floats that will be modified with UI sliders on CPU side and accessed as read-only on GPU side. Let’s use these values for adjusting pixels of the texture. In order to change temperature and tint of the image, first, we need to convert its color space from RGB to LAB. Color spaces is a huge subject for another article, but the main idea is that we can interpret color values in different ways, and commonly used approach for image editing requires working in LAB. Now, import a header with convenience conversion functions below metal_stdlib include.

Next, replace the last two lines of the adjustments function with the following code:

As we can see, each thread reads a pixel value from a texture at its position, converts the value from RGB color space to LAB, adjusts the value using temperature and tint arguments and converts it back to RGB. The result value is written to the the destination texture at the the same position it was read from a source.

If you did everything right, the final kernel should look like this:

Congratulations! You’ve written you first metal compute shader 🎉! In the next chapter we are going to write the encoder for this kernel.